HomeNewsA taste of Japan at the Paris Bakery and Patisserie School!

A taste of Japan at the Paris Bakery and Patisserie School!

As is the case every year, the school will host a delegation of students from the Japanese pastry school Visionary Arts, which has campuses in Tokyo and Fukuoka. From 25th to 28th September, twelve students enrolled in the Patisserie BTM vocational training programme will receive an introduction to Japanese culinary specialities. Traditional Japanese doughs and cakes will be featured, including gyoza and castella, along with modern versions of French pastries such as a vanilla and matcha-flavoured éclair. 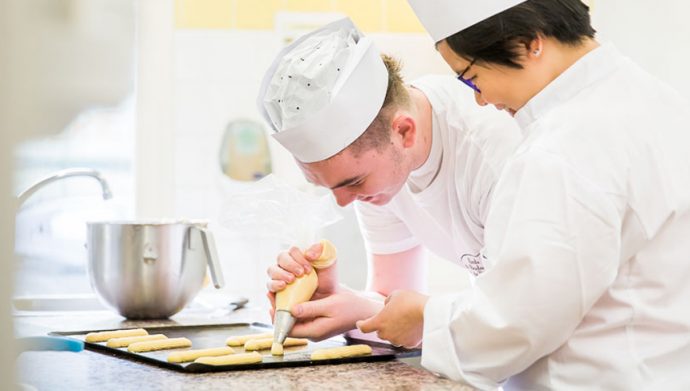 This year the focus will be on sharing and discussing, as this exchange programme with our partners offers students the golden opportunity to expand their horizons and be immersed in a different culture for several days. It will also be an opportunity for them to develop new skills and reinforce their Japanese patisserie techniques.  This year is also the 10th anniversary of the partnership between the Paris Bakery and Patisserie School and Visionary Arts. To mark the occasion, several students and instructors will spend a week in December visiting the cities of Tokyo and Fukuoka, Japan.

Next October, Patisserie BTM students will have the opportunity to attend introductory workshops where they will learn to make several Japanese specialities. In the meantime, we will be looking forward to the delegation’s visit from 25th to 28th September. The first workshop will be hosted by the Japanese instructor Miyuki!

Share
Only a few days left to register for the CJE! Meet with Aurélie Ribay, former intern at Paris Bakery & Patisserie School